Share your Criticker Collections with the rest of the community!
4 posts • Page 1 of 1

Thanks to users karamazov., joseywales, paulofilmo, Ag0stoMesmer, and all other mods and contributors to these. Hope to keep 'em coming. Omissions/suggestions for new subjects or collections already here are welcome, in this thread or message
Last edited by iconogassed on Sun Aug 02, 2020 3:21 am, edited 5 times in total.
Top

This is a great resource. I've been looking through some of these and it's sad how many of these guys are amazingly talented and yet some of them can go on streaks of more than a decade of not being involved in a good film.
Top

^recminds me of the dp for "Alien". That movie is beautiful. and then he just did nothing else. i can only imagine ridley is some tyrannical creature. idk
Top

PrestoBix wrote:it's sad how many of these guys are amazingly talented and yet some of them can go on streaks of more than a decade of not being involved in a good film.

Point is well taken, but I also try and keep in mind stuff like frequent Kubrick collaborator John Alcott's remarks to Roger Spottiswoode on the set of Terror Train (as quoted in Adam Rockoff's excellent book Going to Pieces: The Rise and Fall of the Slasher Film, 1978-1986):

Now look, I just spent the year with Stanley and I've got to tell you I got bored out of my fucking mind. There's nothing better than having to shoot 20 or 30 setups every fucking day. Let me tell you. One a day was death.

Apparently, he took great pleasure in solving the problems of no-budget schlock, literally saving the movie by working out a system of hundreds of bulbs controlled by 300+ dimmers strung throughout the train they had to borrow (and not alter) 'cause they couldn't afford sets. He could have had his pick of prestige projects once he decided to stay in America but instead did mostly inexpensive genre pictures, including vivid work on the unforgettable Vice Squad. 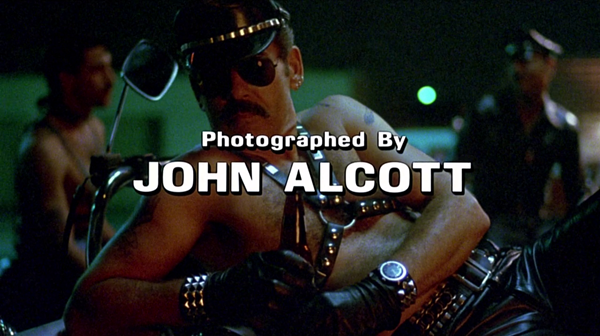